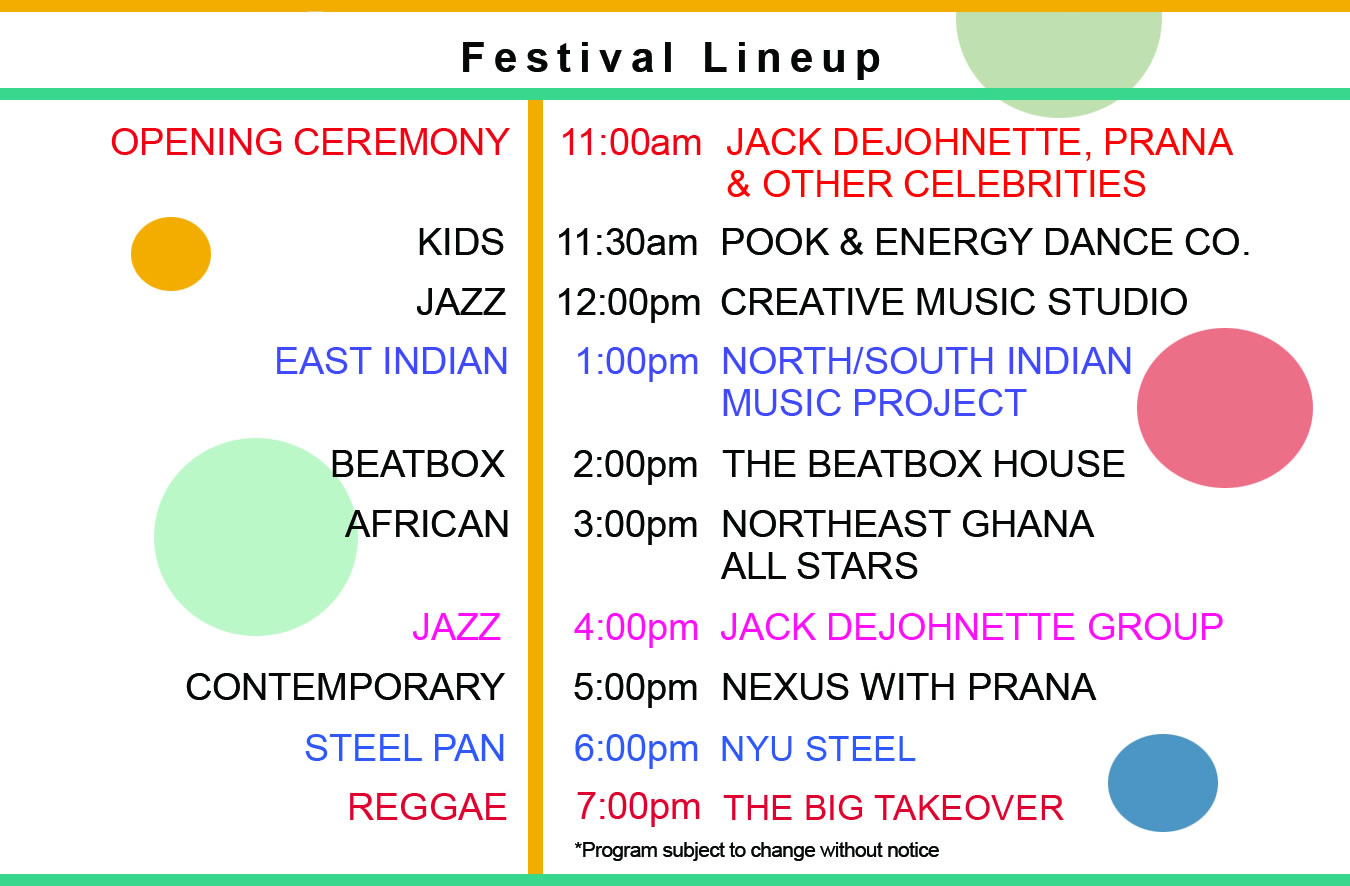 Check out the past 2015 performances, which include many groups for the 2017 festival!

There will be a variety of food trucks on site.

“Garry has created a unique festival that celebrates the art of percussion from the world,  it has been great fun to participate in it and I really enjoy seeing, hearing and meeting such a diversity of major talent from all over. I consider it to be very successful and look forward its ongoing cultural contribution to the richness of the Town of Woodstock and the Hudson Valley.”
– Jack DeJohnette, GRAMMY® Award-Winning Jazz Musician 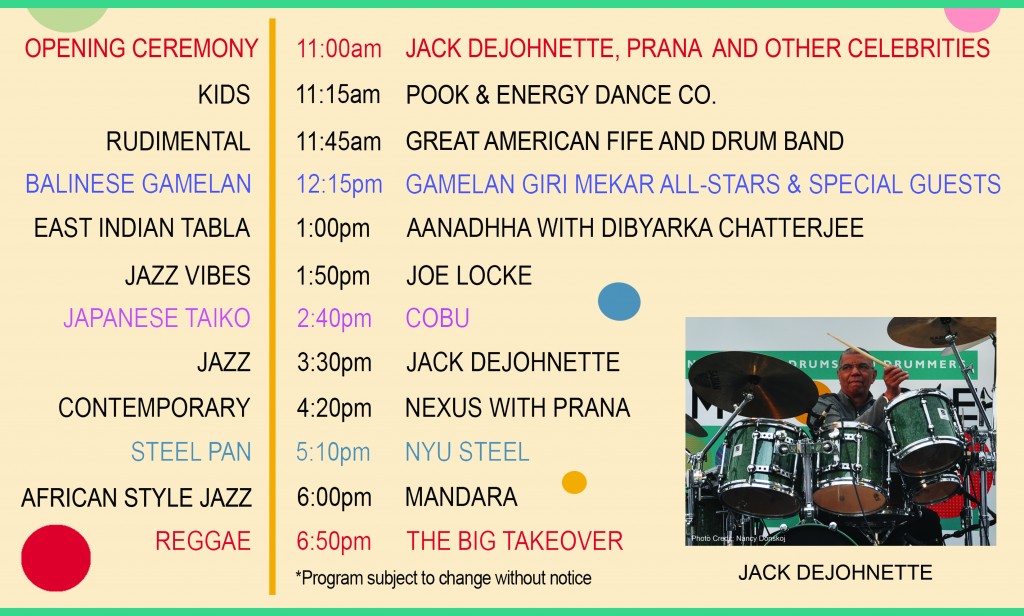 “Garry has created a unique festival that celebrates the art of percussion from the world, it has been great fun to participate in it and I really enjoy seeing, hearing and meeting such a diversity of major talent from all over. I consider it to be very successful and look forward its ongoing cultural contribution to the richness of the Town of Woodstock and the Hudson Valley.”
– Jack DeJohnette, GRAMMY® Award-Winning Jazz Musician

I don’t have to tell anyone who attended the festival this time what a complete gas it was.  Many thousands of people showed up for a picture perfect day of amazing performances, food and fun. The day started in the artist’s cemetery in Woodstock, NY for a memorial tribute to the late great xylophonist / composer George Hamilton Green.  Green family members attended along with a large crowd of G.H. Green fans. From the opening ceremony of Jack DeJohnette reading a poem of peace with improvised accompaniment to the closing act of Levon Helm Studio’s Midnight Ramble Band kicking off their set with Gene Krupa’s 1941 Drum Boogie tune, we were all captivated and moved by an enormous variety and super high quality of music, dance and song. Return to our site often and be sure to “Like Us” on Facebook to see the photos and videos as they become available. Thanks go out to all our performers, sponsors, food vendors, staff and volunteers (all listed on this site)! 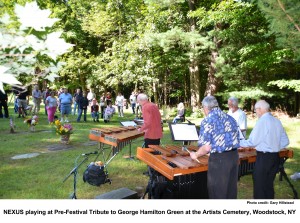 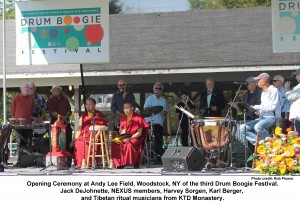 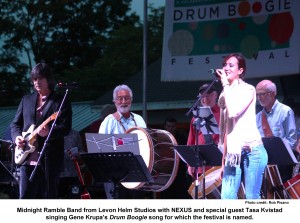 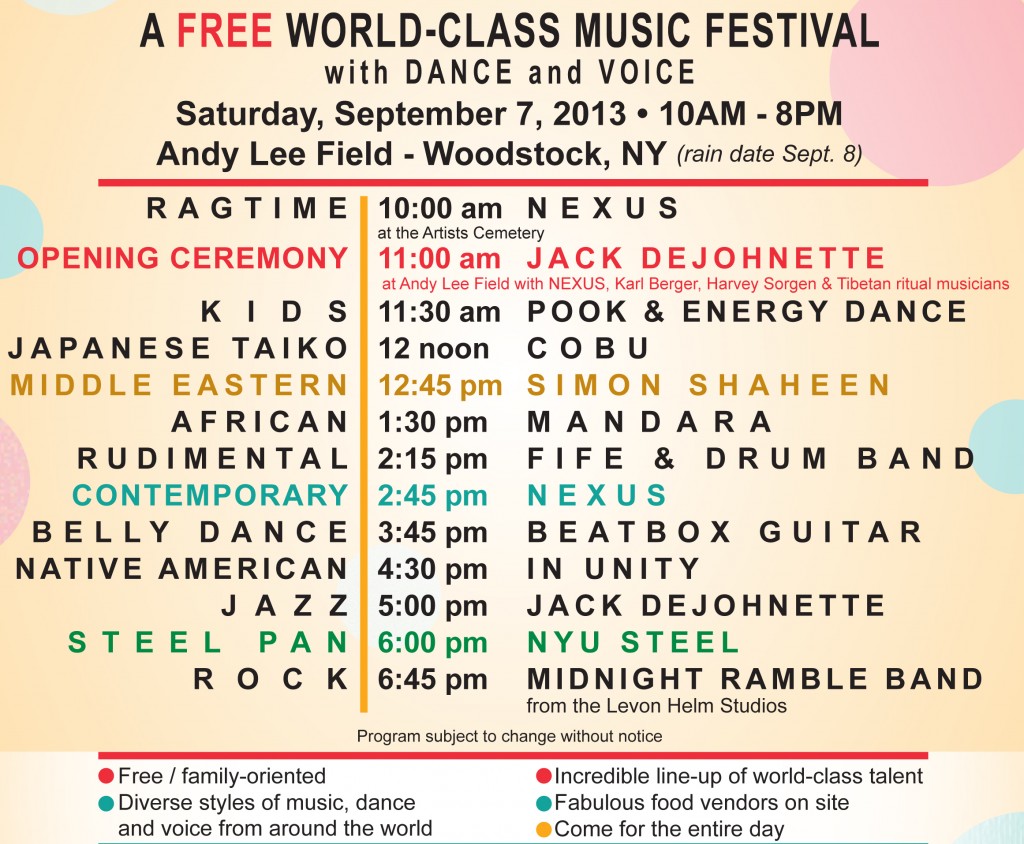 The Woodstock Byrdcliffe Guild presented the first ever Byrdcliffe Festival of the Arts in Woodstock, NY (Colony of the Arts) from Friday, July 13th to Sunday, July 15th.  The Drum Boogie Festival was one of nine Festival Presenting Partners that Byrdcliffe joined creative forces with. The schedule was jam-packed with a diverse selection of artistically rich presentations: story-telling (the spoken and written word), film, dance, music (and the sung word).

On Saturday, the DRUM BOOGIE FESTIVAL® offered a concert called “Garry and Friends,” which was a mini-version of our biennial, all-day-long DRUM BOOGIE FESTIVAL. The “Garry and Friends” concert exemplified the Drum Boogie theme, it was definitely -A Celebration of World Drums and Drummers- with performances in the first set by: Matoaka Little Eagle and Powhatan Swift Eagle, Valerie Naranjo and Barry Olsen, POOK and Evry Mann and the Energy Dance Company, and in the second set by: NEXUS members yours truly and Russell Hartenberger with guest Chris Earley. The audience participated in numerous ways: clapping, singing, toe-tapping – heads were bopping and I saw a few jaws drop in amazement too. The audience was turned on and responded wildly to the eclectic mix of world-class drummers and dancers. The instruments were acoustic but the feeling in the Byrdcliffe Barn was electric.  In fact, I built a set of three acoustic instruments for the Steve Reich piece we did, Mallet Phase.  The three instruments, tuned in the ancient system of ‘just intonation’, were a large African style xylophone, a very large metallophone made of Woodstock Chimes tubes and a cool sounding instrument made of resonators on which the openings are “slapped” with flip-flop like mallets. 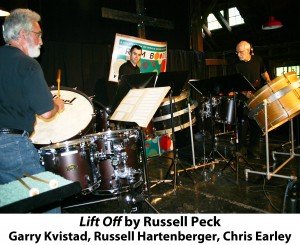 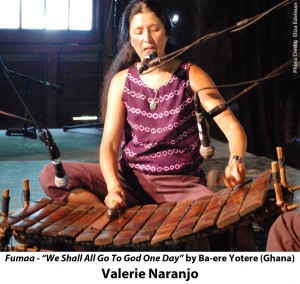 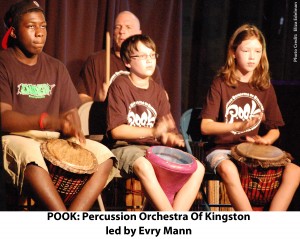 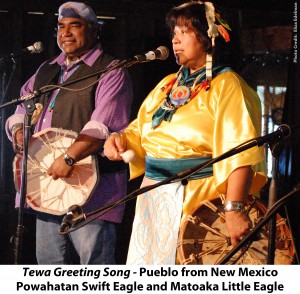 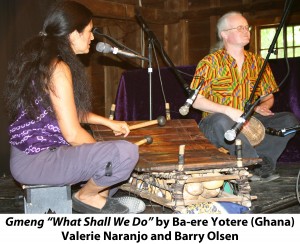 On Sunday, the DRUM BOOGIE FESTIVAL offered a workshop for children ages 5-12 led by musician and music educator Dave Laks. The workshop called, “Open Ears” taught participants how to build an instrument –in this case a tambourine with a personal story or design depicted on the drum head! Dave paced his workshop with the seasoned wisdom of an educator; there were periods of concentration mixed with break-out sessions of participation and movement. The great selections of music that accompanied his lesson helped focus and energize the participants accordingly. Each child was accompanied by a parent, friend or guardian -they seemed to enjoy the workshop as much as their young attendee. 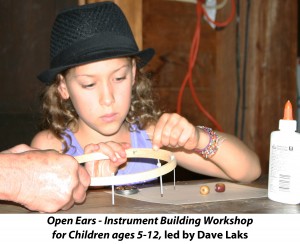 We’re happy that the Woodstock Chimes Fund produced the Drum Boogie Festival element of the Byrdcliffe Festival of the Arts event.  All in all we had a great time and we feel this ‘festival of festivals’ ignited anticipation for our next all-day-long, Free DRUM BOOGIE FESTIVAL – in Fall 2013. Keep posted and poised to boogie with us again!  A big thank you goes out to all that made that weekend of amazing events happen.