Attah Poku is a prominent master drummer from the Ashanti Region of Ghana, West Africa. Born and raised inside the walls of the Ashanti King’s palace, Prof. Poku began training with his grandfather when he was only five years old, and officially joined the Ashanti King’s drum ensemble when he was ten. He currently is on leave from employment at the Centre for National Culture in Kumasi, where he is the master drummer for the resident Amamereso Agofomma Folkloric Troupe. Prof. Poku directs the Kiniwe ensemble at Tufts University, the West African drum and dance ensemble at Wesleyan University, and is the Artistic Director of the Agbekor Drum and Dance Society.

Francis Akotuah is a musician from Accra, Ghana and is now based in Ann Arbor, MI. As an instructor at the University of Ghana for almost two decades, he mentored many of Ghana’s up-and-coming performers and introduced countless students from around the world to Ghanaian traditions. He has performed with Ghana’s leading ensembles and conducted workshops at universities throughout the US, Canada, and the Netherlands.

Koblavi Dogah is a man of many names – Victor, Danger Blue, Zogo – just to name a few. Dogah is a percussionist and dancer born in the southern part of Ghana. He started learning Ewe music when he was 5 years old, and by the age of 12, was teaching at the Dagbe Cultural Centre, run by the late Mr. Godwin Agbeli. Koblavi attended Berklee College of Music with the first full-ride scholarship through the African Scholars Program, and received his Bachelor of Music with an Education focus. He has performed and taught workshops at universities such as Berklee, Tufts, and St. Michaels, as well as countless elementary schools, middle schools, festivals, and camps.

Gloria Nyame is originally from Ghana, and currently lives in the Bronx where she dances for the Ahenema Cultural Group, New York City’s premiere Ghanaian drum and dance ensemble. She started dancing in the Ashanti Region of Ghana when she was six years old, and danced professionally throughout Ghana and Nigeria with the Centre for National Culture, the Adinkra Cultural Troupe, and the Catholic Youth Organization at St. Peter’s Cathedral. Gloria is well known for her graceful movements in the Ashanti dances of Kete and Adowa.

Richard Dwomoh is a highly acclaimed dancer from the Ashanti Region of Ghana. Touring Germany, Italy, Nigeria, and Ghana, Richard has danced with the Centre for National Culture, the Adinkra Cultural Troupe, and Bishop Sarpong’s Cultural Troupe at St. Peter’s Cathedral in Kumasi. When living in Ghana, Richard earned the reputation throughout the Ashanti Region as one of the premier Kete and Fontomfrom dancers of his generation. Richard currently lives in New York City where he drums and dances with the Ahenema Cultural Group.

Nii Boye is known as one of the top Ghanaian drummers of his generation, and is credited with many popular innovations in the Kete drumming style. Nii Boye was lead drummer of the Nsuase Kete Group, one of the most well-known Kete groups in Asante. When living in Ghana, Nii Boye also played with the Centre for National Culture, as well as Bishop Sarpong’s Cultural Troupe. Nii Boye currently lives in New Jersey, and regularly performs with the Ahenema Cultural Group. 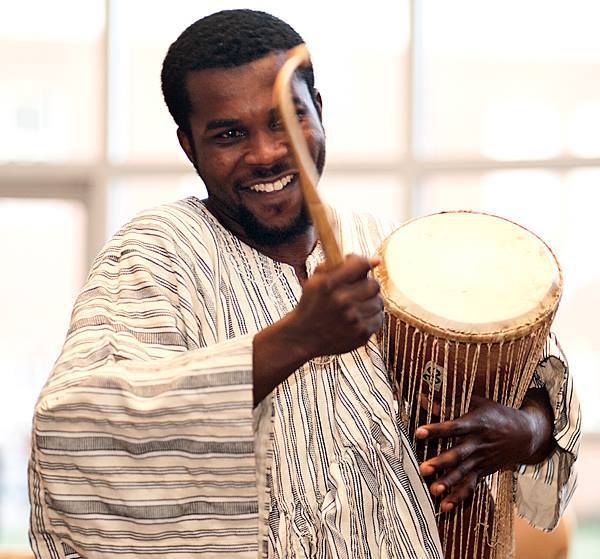 Michael Ofori is a multifaceted performing artist from Ghana. He has been drumming since childhood, learning from many master drummers from the Center for National Culture in Kumasi. Michael’s creative interests lie in African performing arts traditions. He has performed with Amammer?so Agofomma (Cultural Center’s Folkloric group), Azaguno Inc. (Athens, Ohio) Manhyia Tete Nnwomkr? (The Ashanti King’s Singing and Drumming Ensemble), The Ghana Dance Ensemble at University of Ghana, The National Dance Company at the National Theater of Ghana and NOYAM Dance Institute. Michael holds a BFA in Theater and Dance from University of Ghana, an MA in African Studies from Ohio University and is currently pursuing an MFA in Theater Education at Boston University. He is excited to be sharing his music with all.

Ben Paulding is an American percussionist who extensively lived in Kumasi, Ghana, drumming on national television and performing for Ghanaian presidents, traditional chiefs and queen mothers. In West Africa, Ben had over 200 performances with the Centre for National Culture and the Nsuase Kete Group. Ben currently lives in Boston where he directs the Fafali music and dance ensemble at Brandeis University, serves as Drum Leader for the Agbekor Drum and Dance Society, and instructs the Hyde Park Youth Percussion Ensemble. Publishing credits include the chapter “ Kete for the International Percussion Community” , in Discourses in African Musicology: J.H. Kwabena Nketia Festschrift (ed. Kwasi Ampene, 2015), as well as multiple articles on African drumming for Rhythm! Scene, digital magazine of the Percussive Arts Society.
benpaulding.com

Ryan Loud graduated with honors from UMass Dartmouth. He holds a bachelors degree in percussion performance with a focus in jazz and world music studies. After graduating, Ryan went on to teach as a percussion specialist at King Philip High School in Wrentham, a position he has now held for thirteen years. Upon arriving at King Philip, Ryan started a program called “World Percussion” . Unique to its kind in the New England area, students perform in a West African music ensemble, a Steel Pan ensemble, as well as study Afro-Cuban styles. Ryan was also a temporary professor at UMass from 2013-2015, teaching West African music. Ryan continues to perform professionally throughout New England on drum set, vibraphone and world drums.