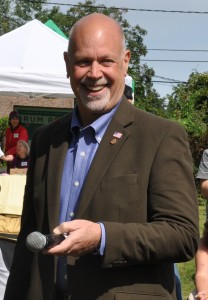 Ward Todd is President / CEO of the Ulster County Regional Chamber of Commerce and is a graduate of the US Chamber of Commerce Institute for Organization Management at Villanova University. He was a member of the Ulster County Legislature where he served as Chairman and Majority Leader. He also is a member of the Junior Achievement Steering Committee and the American Cancer Society Legislative Committee and the Phoenicia Rotary Club. He was a member and President of the Kingston City Schools Board of Education and also served on the Onteora Board of Education. He served as chairman for several years of the Alzheimer’s Association Memory Walk and was also a member of the Hudson Valley Alzheimer’s Association Board of Directors. He was Vice President of WKNY’s Toys for Tots campaign and was President of the Children’s Annex Board of Trustees. He also served on the Board of Directors of the United Way of Ulster Country, American Heart Association, Rip Van Winkle Council Boy Scouts, American Cancer Society and Ulster County Girl Scouts. He is a well-known friend to many other charitable organizations and frequently volunteers as Master of Ceremonies at fundraising events. In 2006, Todd was honored at the Belleayre Conservatory Snow Ball and given their “Spirit of the Catskills” Award. He was recognized for his community service in 2004 as Gateway Industries “Toast of the Town” honoree and was the 2003 Ulster County Arts Council “Arts Advocate of the Year” for his efforts to promote and advance the arts in Ulster County.Ward is a familiar voice to radio listeners in the Hudson Valley. He was Operations Manager and Morning Show Host at WKNY-AM Kingston. He was Chief Staff Announcer at WTZA-TV (now WRNN) and was a network TV Ring Announcer for professional boxing evens involving former World Champions Billy Costello and Tracy Patterson.